What's new in the world of augmented reality? The 2D world is well on its way to go full 3D on us with both tech advances and secured funding, as well a hint of what one tech giant may include in their AR glasses.

Creating simple 3D models could soon enough not require much more than a picture of any kind. With the Photo wake up method, any character or face can come alive in a photo, poster or even graffiti art. This could be a new way to enjoy and interact with photos or even create their own virtual avatar from a picture of themselves. Although this tech is not new, now with AR on the rise, a need for it has developed. This, paired with 3D scanning tech like photogrammetry and volumetric capture continually evolving, means shaving off hours and hours of labour for content creators. This might be the start of a big change in how we view and interact with 3D.

As I mentioned in the previous news, the need for 3D content has increased along with the wildfire spread of AR use. Now 3D content capture company Matterport has confirmed an investment of 48 million dollars for further development of their tech. The company, known for its camera technology and 3D content solutions as unveiled a platform using AI tech to generate 3D models from 2D images captured by 360-degree cameras. This means one step closer to the digital twin of the world around us. All you need is an image, and a space or object could appear in front of you.

Both AR and VR has been applied in classrooms all over the world. Now it has been used to teaching computer science. Coding will be needed in most professions soon enough as well as the growing job market in sectors like technology and engineering which means coding is of an essence to school kids from a young age. For many struggling with numbers and digits, showing code visually in AR has dramatically aided in up taking of new information, as well as added elements of gamification. AR has been applied in many different formats, from headsets to apps and is versatile enough to fit almost any curriculum. The future of learning, indeed!

Finishing off this week in AR news comes with a patent filed by Facebook. As we know, the race is on to AR glass nirvana, the one who first gets the masses and reaps in the most profit is the dream. Facebook has quietly been developing their headset and is thinking of a new way to solve audio output in AR glasses. They are testing out “cartilage conduction” technology that would allow you to hear sound from a computer, your glasses, without having to wear headphones. The patent was filed late February. Although tech giants file hundreds of patents, of which many never see the light of day, this may have just given us some insight into how this tech giant is thinking of solving one of the many design and user challenges AR glasses are posing. 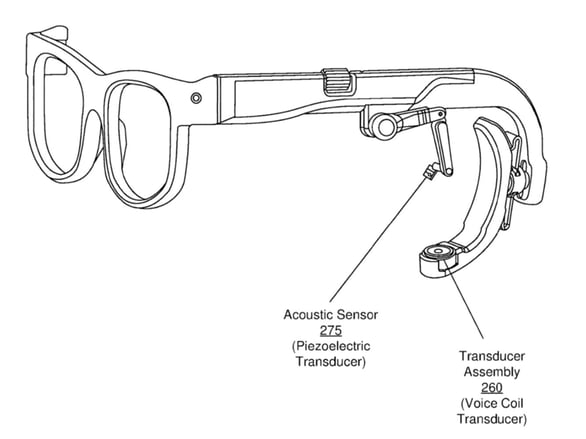