In this versatile week in augmented reality, we see AR being used in immersive backdrops on movie sets, preventing oil spills, in electronics prototyping as well as in floating robots in the canals of Amsterdam.

In the movie industry, AR is offering new alternatives to the traditional green (or blue) screen. Green screens, often being not too inspiring for actors to work beside in the age of CGI, a new backdrop with a real-time virtual scene can now give actors and directors a way to visualise the set, make performance-based choices and save time and money by eliminating post-VFX shots.

This could mean removing months of post production and eliminating millions of dollars in costs. Immersive backdrops is set to become a powerful tool for visual storytelling in film. Green screens can be replaced with LED screens with adjustable lighting, fast-changing backdrops and other on-set adjustments, meaning faster making way for quick changes and cutting costs at all corners of a production.

Below an example of an immersive backdrop used for US-based the Weather Channel covering the impact of Hurricane Florence  in 2018.

Augmented reality is finding its use in all areas, latest being the breadboard: a construction base for prototyping electronics.

AR has been used along with some very clever electronics to transform the classic breadboard into a powerful mixed-reality tool for testing and simulating circuits. It allows users to digitally place electronic components on a real breadboard, tune their values in software and see the changes applied to the physical circuit in real-time.

The tool, called VirtualComponent, is easy to use and allows users to test components value configuration with little effort.

Oil firms have adopted AR headsets and glasses to fix problems on rigs, refineries and plants. Oil rigs existing in remote location, means help is not always at hand when you need it, which can result in disastrous consequences.

With AR headsets and glasses, on-site technicians can overlay digital images on the real-life machinery and transmit info in real-time to experts around the world, who can immediately respond with appropriate instructions and guidance, reducing errors and oil leaking out in the sea.

Although still used on a small scale, AR is set to transform not only the oil industry, but all and every industry requiring expertise to fix and optimise work, expertise which is not always found at hand.

Robot boats in the canals of Amsterdam

A fleet of autonomous boats, or robots, are being developed to be placed in the 165 canals of Amsterdam. The canals, once used a lot more for transportation, will find help relieving congestion in the city, by having the robots act as transportation devices. They will also be used for constructing pop-up structures like bridges, performance stages or even food markets.

The roboats and their rectangular hulls are equipped with sensors, thrusters, micro controllers, GPS modules, cameras among other hardware. The sensors would also gather data on the city’s infrastructure and the air and water quality. They could also collect garbage from the canals during nighttime.

The roboats would autonomously move from point to point using computer vision and control techniques as well as AR tags similar to a QR code, found at their docking stations, helping the roboats detect and computer their precise 3D position and orientation relative to the tag.

These roboats might not look like much right now, still being in project development phase, but the city envisions them eventually being part of their canals. 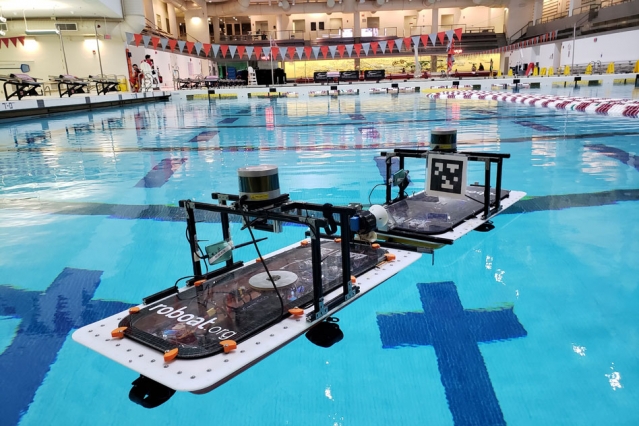