So what's new in AR and immersive tech this week? Well, Facebook is making advancements in hand-tracking on two different fronts, personalised 3D avatars are all the rage as well as drone pilot training with the help of AR.

Facebook has acquired the NYC-based startup CTRL Labs. The startup is developing a wristband that track’s the user’s fingers by the electrical signals passing through the user’s wrist into the fingers.

When tendons and muscles move inside the arm, the signal changes, which the wristband detects and can determine their position. Machine learning is used to convert the positions into finger poses.

Similar devices already exist, but Facebook picking up and acquiring such tech might mean a faster switch in how we interact with AR or VR. If this works, then only using a wristband for hand tracking, can strip of other tech in headsets that can slow down processing or drain the battery.

Will be a few years for this to develop fully, but having a tech giant behind it hopefully means results in just a few years.

Moreover, in connection with the acquisition of CTRL, Facebook and Zuckerberg have announced that the VR headset Oculus Quest will feature a new kind of hand-tracking.

The hand tracking is said to work by the headset’s existing monochrome cameras, creating a set of 3D points to represent your hand and finger movements accurately. The tech will be made available sometime early next year for consumers to experiment with and as an SDK for developers.

Your remote self as a personalised 3D avatar

With social events and work meetings now happening virtually, avatars have started to take 3D form. With High Fidelity’s 3D Avatar Creator, you can build a realistic avatar for yourself to be used either in a work setting, like a remote meeting, or as a game avatar.

The app (or a VR environment using High Fidelity’s open-source software) takes a picture of your face and creates a detailed 3D representation of you. You can then tweak the appearance of the 3D avatar to get it just right, as well as adding clothing or other styling - similar to the game the Sims. This gives for a quick new tool to use either for gaming or other virtual experiences.

Personalized avatars might be on track of one day replacing us for remote meetings, looking representable and even maintaining eye gaze via an algorithm. When wanting to schedule a quick meeting with someone, it can be done even faster in a virtual setting without having to locate a colleague or client in person. 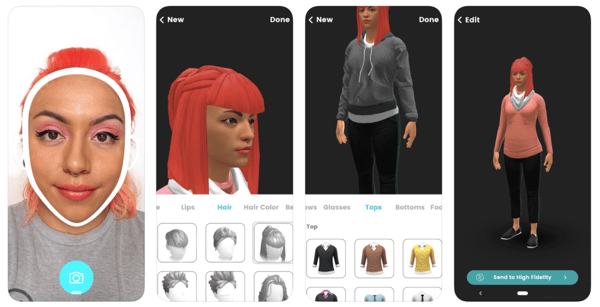 A German startup DronOSS is using augmented reality to train drone pilots to-be. Their technology is a remote AR device connects to the drone and detects its movements and rotations. On a smartphone or other screen, the pilot can see overlaid AR obstacles and structures.

This allows the pilot to practice various manoeuvres or practice fly skills without the risk of colliding. Drones being both expensive and used during sensitive missions like during a fire, this new tech helping pilots train will facilitate many future situations.