What's new in the past week of AR and immersive tech? Haptic touch – nano-thin, visualization of bluetooth and Wi-Fi signals and a another light-weight MR glass contender and more, in this week of Arilyn's AR weekly.

Haptic advances are continuously closing the gap between reality and the virtual, but many devices can feel somewhat clumsy to achieve a sense of touch.

The prototype continuously measures skin deformation with strain sensors, giving feedback at a frequency of 100Hz, and a sensitivity of up to one newton of force - quite amazing. This would mean the tech and the wearer are in sync.

For now, the prototype is a finger attachment, but will soon enough develop into being fully wearable. The device gives promise for fields like neuroscience, “where it can be used to stimulate the human body, while researches study dynamic brain activity in magnetic resonance experiments” says Harshal Sonar, one of the lead authors of the research paper.

Another week, another pair of smart glasses. MAD Gaze GLOW has launched on Kickstarter, as lightweight, stylish and super portable, striving to get as close as possible to the sunnies we were today. They call them “binocular mixed reality glasses in hybrid form”.

By this they mean the glasses connect directly to your phone (Android-only at this point) and can control your phone and see its content right on the screen of the glasses, meaning to keep your head straight and your hands-free.

The foldable glasses deliver a 45 angle FOV and 720p resolution, as well as only being 75g light (only 20 more than normal average glasses). The mixed reality part is playing in through their tracking system, using SLAM and hand gesture controls as well as voice recognition. The device can also be paired with Bluetooth joystick or keyboards.

Once again, we wait and see how these latest smart glasses gain traction and how they work once tested, but this just gives to show there are many contenders eager to test out the field of smart glasses, the next device for taking users eyes off the screens down below and integrating immersive technology in a more seamless way. 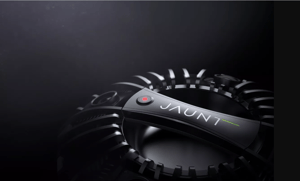 American telecom giant Verizon has acquired AR company Jaunt XR. The startup started out creating VR video but later shifted their focus to AR, more specifically their creation and distribution of volumetric video of humans, for eg. live-streaming hologram-like 3D videos, which might hint at the reason for this acquisition.

This just hints at another tech giant expanding its capability and reach into immersive tech, which Verizon has already done.

The app shows the signal as colour-coded floating bars, showing the spectrum of the signal. The signals can be touched and connected to, revealing real-time data of the signal.

This means users can easily spot and connect in areas with a stronger signal in order for content to work fully.