Another week in the virtual world brings us the future of augmented workspaces with Facebook's new concept, augmented barcodes for all and everything and a groundbreaking fashion show making use of the virtual in times of social distancing.

The future of augmented workspaces

The future of laptops screens might just take the look of Facebook’s new concept interface, which they call “the future of augmented workspace”. The concept was presented with a user donning a mixed reality headset and having virtual monitors hover in front of them. The screens could be moved around with the help of the headset’s optical hand tracking and a physical keyboard used for typing. The concept is building on an existing passthrough function on the Oculus Quest, letting you keep an eye on your physical surroundings. This concept emerged during these times of remote work, and Facebook announcing it was making way for more productivity and collaboration apps. The concept for this AR/VR interface would allow you to bring your virtual office anywhere and have easy access to colleagues and ongoing projects, much like Spatial has going on already. 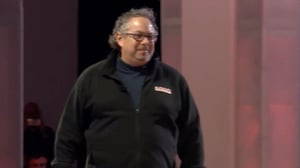 Magic Leap now amid rumours of its sale, and offices closing down, their CEO Tony Abovitz has announced him stepping down as the company’s top executive. Although he managed to raise a new round of funding and during his time there the company valued at billions of dollars, but the struggles Magic Leap has had fulfilling their original vision of transforming the world with AR glasses, has led to him stepping down, making way for someone to make business out of all that value. The company has announced a shift to focus enterprise clients, as many XR companies have done, as big money does not lie in consumers - yet.

AR is slowly seeping it’s way into our lives, one company determined to make it part of our everyday interactions is Scandit and their AR Overlay. They combine mobile barcode scanning, text recognition and AR to add valuable information to bar codes that can change in real-time, giving both consumers and workers easy access to information and minimising human error in stock counting, shipping or even in medical settings. Their barcode scanner software MatrixScan locates, tracks and decodes multiple barcodes, adding visual feedback to indicate which ones have been scanned, simply by hovering over the barcode.

They have an SDK for websites and native apps and big clients like flight company SAS and the French post La poste using their bar code software just gives to show the need for a software like this, small bits of AR integrating themselves in our life, one barcode at a time.

Another emergence in times of lockdown is  a virtual fashion show put on by fashion label Hanifa. The fashion designer Anifa Mvuemba made use of 3D models in her virtual show to display her clothes collection. The clothes were draped on 3D renderings, making it look like invisible models  were showcasing her creations. The show, first visible in IGTV video, was hailed as groundbreaking, receiving an immense amount of praise for its innovative way. With many countries still in lockdown, this seems to be strongly paving the way for the future of fashion, making the clothes focus, not their wearers.

Hope you enjoyed this share, feel free to share your thoughts below in the comments or comments or wishes for our blog in general!