Could holograms soon be a part of our daily lives? Maybe so, thanks to Looking Glass!

Also, Facebook and Apple are racing to bring their AR glasses to the masses, TikTok releases its first LiDAR-powered AR effect, and L'Oréal rolls out an AR makeup line. Read on!

Looking Glass Factory has unveiled a conversion service that can convert any 2D image into a 3D hologram.

The company's HoloPlay Studio has already been able to convert Portrait Mode photos. The new service, Looking Glass Portrait, expands the universe of potential holograms to include scanned family photos, comic book panels, hand-drawn art, and any other digital image. Once converted, the holograms appear on a holographic display.

The platform will launch this spring, first via the Looking Glass Factory website and then in the HoloPlay Studio suite as a premium feature.

Facebook to launch smart glasses in 2021 but without augmented reality

Last year Facebook launched a project to bring their version of AR glasses to the masses. This year they are planning on launching a pair of smart glasses - although without augmented reality.

According to the company's hardware chief Andrew Bosworth, the device will undoubtedly be "connected glasses" and offer lots of functionality. But the company is not sure about which functionality precisely they are providing - so smart glasses is what they are calling it.

Smart glasses are part of Facebook's long-term effort to seize the next big computing platform. The features for the upcoming glasses remain in the darkness for now. Still, they are said to align with Facebook's broader philosophy around AR, which is to make technology peripheral to human interactions to enhance "presence." 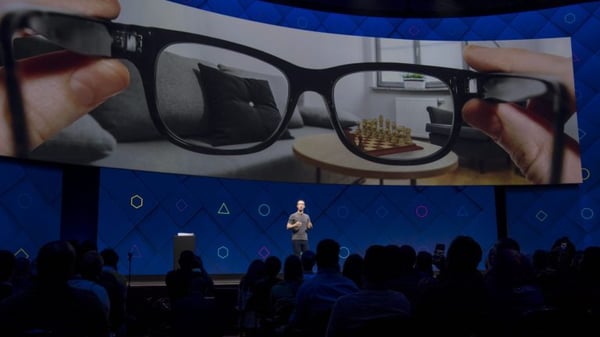 The long-rumored "Apple Glass" AR headset and a tracking device AirTag might see sunlight this year. According to respected Apple researcher Ming-Chi Kuo, Apple is set to debut a wide range of new projects in 2021.

In a research note from Kuo, the analyst claims that said products will debut alongside various other Apple devices, such as new AirPods and Apple Silicon Macs.

But, as always, with all rumors, nothing is certain. Previously Kuo reported a mid-2020 launch window for the AR headset. That was before a report by The Information pointed towards a potential 2022 release. Still, exciting!

TikTok follows in the footsteps of Snapchat and other apps in leveraging lidar scanner for augmented reality. The social video app launched its first-ever LiDAR-powered effect just under New Year's.

The effect features a similar AR ball to Times Square's New Year's Eve celebration. After a countdown, the ball drops and explodes to fill the room with confetti, as well as a floating "2021". The effect aims to understand the space and land the confetti more realistically after the ball explodes.

TikTok described the effect as being able to bridge the digital and physical worlds visually. The company says it plans to roll out more innovative effects during 2021.

To ring in 2021 we released our first AR effect on the new iPhone 12 Pro, using LiDAR technology which allows us to create effects that interact with your environment - visually bridging the digital and physical worlds. We're excited to develop more innovative effects in 2021! pic.twitter.com/6yFD2FfHta

Lots of AR's potential lies in the things that live only in the virtual world and become visible through AR devices. And that is exactly what the beauty giant L'Oréal is up to. It's called Signature Faces.

The virtual makeup line goes for any occasion occurring on any digital platform. The most appropriate time appears to be when the user is doing recreational activities - such as video-calls or uploading a story to Snapchat or Instagram.

In addition to try-before-buy applications many consumer brands have adopted, more and more clothing and makeup lines are going virtual-only in the future.