Samsung is releasing a device to help people find their lost items with augmented navigation. Also, musicians promote their new music and themselves in AR, and Google rolls out a range of XR experiments.

Google's WebXR Experiments look to enhance the world around you

The WebXR Experiments is a collection of experiences made with WebXR, featuring Google's projects. It aims to encourage everyone to grow the collection and push the boundaries of what's possible with WebXR.

The website lists three applications launched and one in the making. Floom spawns portals on the ground, transporting the user to the other side of the world. The app shows the user hovering over land or water, and once they've opened a new tunnel, the name of the location is displayed on-screen.

Sodar is a social distancing radar that highlights a two-meter bubble around the user as they move. Measure Up measures the length, area, and volume of objects. It utilizes the user's phone to place pins along the edges of nearby items.

Picturescape, still a work-in-progress, is pitched as a new way to view your memories. It takes advantage of pictures saved on Google Photos, which the user can virtually hang to make an augmented exhibition.

These experiences are available for any Android device that is compatible with ARCore. Developers and creators can also submit their own WebXR projects.

Snapchat and its AR capabilities have become a haven for music artists seeking to promote their new albums or simply amplify their art. Artists like Drake, Nicki Minaj, Ariana Grande, and Bruno Mars have launched AR lenses on Snapchat to push their new releases.

Now Billie Eilish, Cardi B, Meghan Thee Stallion, and Justin Bieber have joined the immersive Snap game. And so has Beatles with a superimposing of the Abbey Road.

The Snapchat lenses are fun for sure, but they don't offer much interaction between the artists and their fans.

Luckily there is such a thing as musical holograms! An AR app Jadu has collaborated with Lil Nas X to let fans "have a conversation" with the artist. In the experience, Lil Nas X paces around nervously, having a one-sided conversation. He pauses between his lines, allowing users to record videos with their own dialogue and share the virtual conversation on social media.

A little clumsy, sure, but interactive! Kind of.

Samsung Electronics has announced the official launch of Galaxy SmartTag+.

Galaxy SmartTag+ is equipped with both Bluetooth Low Energy (BLE) and ultra-wideband (UWB). It also visually guides the users towards their missing items using AR and smartphone's camera.

Samsung promotes the SmartTag+ to easily find misplaced items, locating belongings visually, pinpointing the tag's location, even when it's far away, and remotely controlling smart devices.

Galaxy SmartTag+ can be attached to everyday items. The AR Finder then guides the user with an easy-to-follow interface on an UWB-equipped smartphone. The AR Finder shows how far away the user is from their Galaxy SmartTag+ and points in its direction. And once the tag's location gets closer, the user can choose to have it produce a loud ring so that even if it's slipped under the sofa, you'll have no trouble finding it. 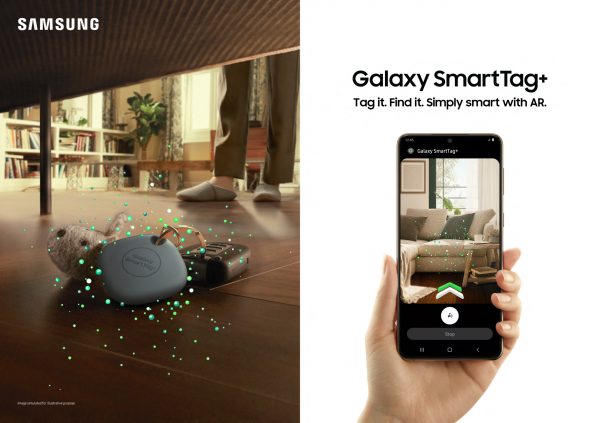