World's largest augmented reality mural is in the making in Tulsa, Adobe launches Substance 3D tools for immersive creativity, and Facebook is working on some quite interesting AR headwear.

Los Angeles-based artists Eric Skotnes and Ryan Sarfati, better known by their artist names of Zoueh and Yanoe are working on a massive project in Tulsa, US - a massive 15,000 square foot (appr. 1400 square meters) mural.

The mural called The Majestic "is kind of like our version of an ethereal world," said Sarfati. The piece will present an angel holding two children and local flora and fauna.

The painting is scheduled to be completed in July, after which animators will come in and bring life to it - animations, audio and 3D launching through the viewers' mobile devices. It will also hold a world record of the largest AR mural in the world. 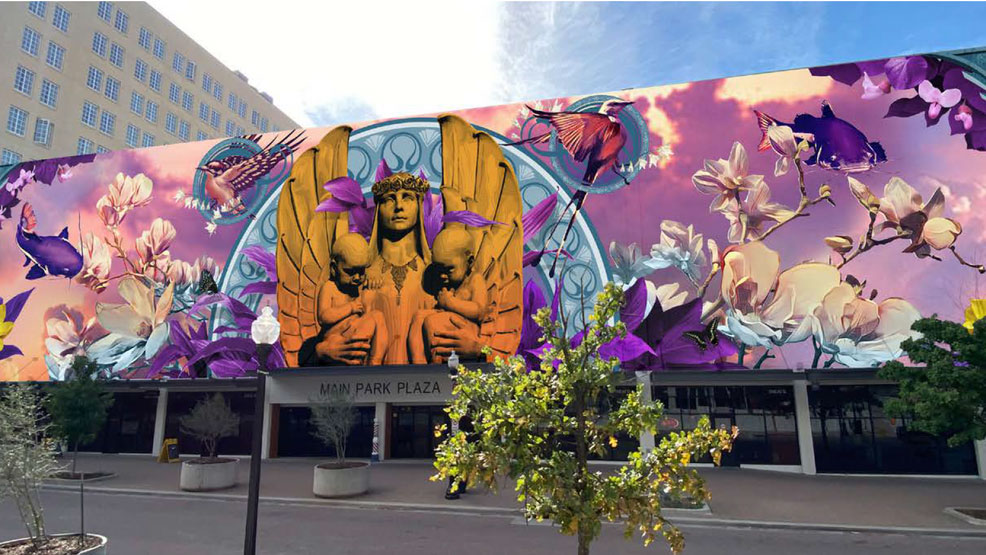 In 2018, the company acquired Allegorithmic to do 3D and immersive design. Now, it targets a new generation of designers who are just starting to use 3D in their processes.

Substance 3D uses artificial intelligence to eliminate much of the technical complexity of the 3D design. In addition to 3D tools, the collection includes models, textures, lighting systems, and other assets.

The tools aim to make more realistic special effects, gaming, and entertainment imagery. They are helpful also to other industries that similarly require precision in design.

Facebook is working on an interesting piece of AR headwear

Ok, this one had me laughing so hard I had no choice but to include it. Round of applause to Futurism for exquisite writing!

Facebook has been awarded a patent for augmented reality (AR) headwear, and it sure looks quite interesting!

These new designs incorporate the display into existing articles of clothing and, by moving hardware away from the wearer's face, could theoretically make AR headgear more comfortable. The headwear comes with a mixed reality display that can fold up and out of sight when you don't feel like using it, which could come in handy.

"The display also somehow simultaneously dangles from the edge of a baseball cap and balances on the wearer's nose. If baseball caps aren't your style, don't worry! Facebook thought ahead and also released designs that would work with a visor, a cowboy hat, and even a fedora," Futurism wrote.

If the mental image of this isn't making you giggle, maybe this will.

"Even the little dude in the design mockups looks like he doesn't want to be there. I mean, just look at him. He looks like he's trying to escape his own hat."

But jokes aside. This is still progress in trying to find the right gear for AR wearables' mass adoption. You can't know if it works or not if you don't try it first.

Okay, friends, that's all for now. See you next time!