A digital map maker Here Technologies has spent the last several years working to refine and broaden its location platform. Now, HERE has launched high-definition 3D models of major cities to enterprise developers. It enables companies to create the next wave of mapping, smart city, and entertainment using XR.

Everything in the virtual map is volumetrically and geospatially accurate, including size and elevation, and exterior color. Developers can build upon HERE's 3D models with their own metadata and render buildings, streets, and entire cities.

HERE foresees that the entertainment industry can use its 3D cities as backdrops, and, for example, telecom companies can plan 5G network buildouts.

This, for sure, is a massive step towards the AR Cloud and the XR experiences truly being all around us. 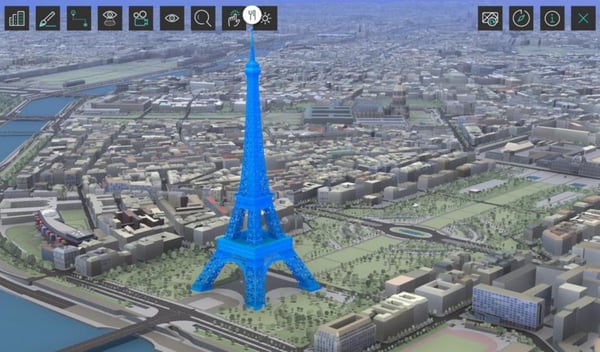 AR-included location technologies continue to play a big part in Snap's product evolution. The company's thought is that social interaction is essentially tied to the real world. If they can add layers based on the user's locations, it can deepen connections and engagement.

Much of Snap's location strategy is said to orbit the Snap Map, which geo-tags users and their Snaps on a map interface. Now, Snap has acquired a location data platform StreetCred. The acquisition could directly impact Local Lenses and Snap's overall location-based AR play, as StreetCred's approach is to open up and decentralize location data.

This crowdsourced approach is similar to Niantic's way of gathering spatial maps from their users while playing Pokémon Go.

Last summer, Snap announced plans to use Snapchat user activity and Snaps to build a 3D map of the world to strengthen its location-based AR — its own version of the AR cloud.

While VR dashboards provide useful core functionality, they are really just big floating screens that appear on top of the VR app. Aardvark aims to instead allow small AR-like utilities to run inside the VR applications.

In a sense, Aardvark gadgets are 'web apps.' Gadgets can be built with the functions alike from any website - the ability to render text, load images, and pull information from other parts of the web. Distribution and maintenance of gadgets are easy because they are basically web pages that anyone can access via a URL.

That's a compelling use case of AR - not something you might easily come up with, but it makes lots of sense for sure!