Does augmented reality reduce eCommerce returns? ARtillery took a look on that.

ARtillery Intelligence produced a report to dive into camera commerce.

A notable aspect of the report's data is AR's consistency in reducing return rates for various product categories. In all cases studied, AR proves its ability to improve margins and demonstrate a real business benefit.

AR visualization gives consumers a better sense of size, colour and dimension, so products are proving less likely to be returned. Many e-tailers welcome this new tool, as returns can cause quite a bottom-line blow.

The "informed purchase" through AR drives conversions and lessens return rates through a better sense of style and fit.

Nreal has announced a new set of consumer AR sunglasses centred around convenience and comfort. The company claims that consumers can wear the Nreal Air all day comfortably - whether business or pleasure.

In addition to solo activities, Nreal Air allows you to create a shared digital space and invite other Nreal Air users to join. Here you can collaborate with coworkers or watch content with friends in the virtual theatre, no matter where in the world either of you is.

The Nreal Air can project a massive 130-inch hi-res virtual display when viewing the screen at a simulated distance of 3 meters, or a 201-inch screen featuring an impressive refresh rate of 90Hz from 6 meters.

The glasses require a tethered smartphone to run - either an iOS or Android device.

"Consumers today are seeking lighter, but longer-lasting AR glasses exclusively for streaming media and working from home. For instance, in Korea, we've found that 78% of our users use Nreal Light to watch streaming content." Xu adds, "Nreal Air builds on our Nreal Light offering and furthers our mission to spread AR globally. With Nreal Air, we've zeroed in on the perks of a portable movie theater and condensed this into lightweight AR sunglasses with a zero-footprint display, while making it affordable," Chi Xu, Founder of Nreal, said in an official press release.

Nreal plans on launching their Nreal Air AR sunglasses in December 2021 in three key Asian markets and rolls out to other markets through 2022. 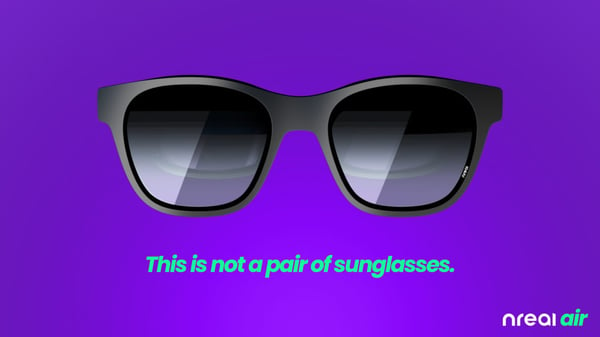