The future of QR codes, barcodes and tags could be invisible! Also, Meta released hand interaction and tracked keyboard SDKs.

QR codes have sort of been reborn due to WebXR's evolution. They offer a straightforward and accessible launchpad for immersive content but often distract a product's or its packaging's visuality. Not to mention that they wear out over time, making the info or data embedded in them get lost.

An MIT team is on the route to change that.

A 4th-year PhD student in the MIT Department of Electrical Engineering and Computer Science, Mustafa Doga Dogan came up with the idea of utilizing infrared cameras and 3D printing as InfraredTags.

The idea arose from Dogan's wondering whether engineers could do something similar for physical objects that digital ones have: metadata. The abstract idea became more concrete when he heard about a smartphone camera utilizing the infrared range of the electromagnetic spectrum, invisible to the naked eye. Infrared light has a unique ability to see through certain materials that are opaque to visible light.

Could labels and tags be hidden inside objects? The solution would make objects more attractive to our eyes and make the embedded information more lasting.

According to MIT News, Dogan and his collaborators have created several prototypes along these lines, including mugs with bar codes engraved inside the container walls, beneath a 1-millimetre plastic shell, which IR cameras can read.

MIT News writes: "In the future if tags like these become widespread, people could use their cellphones to turn lights on and off, control the volume of a speaker, or regulate the temperature on a thermostat. Dogan and his colleagues are looking into the possibility of adding IR cameras to augmented reality headsets. He imagines walking around a supermarket, someday, wearing such headsets and instantly getting information about the products around him — how many calories are in an individual serving, and what are some recipes for preparing it?"

The InfraredTags could indeed solve many issues regarding information and content's accessibility and preservation.

Read more about the InfraredTags here. 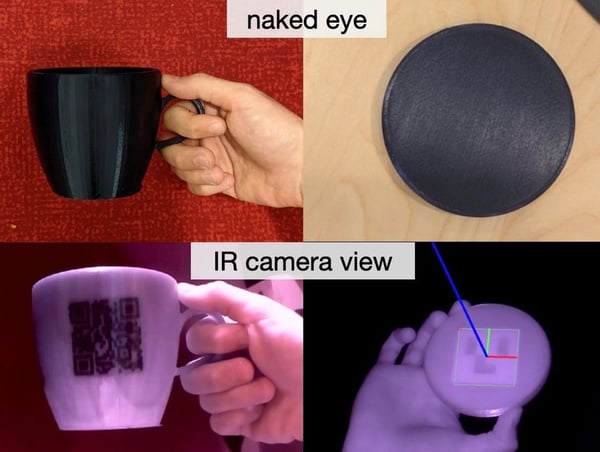 Meta has released a hand interaction SDK and Tracked Keyboard SDK for its Quest VR headsets. The release is said to be "experimental".

Interaction SDK supports hands and controllers. Its goal is to let developers easily add high-quality hand interactions to VR apps. The Interaction SDK is already used in Chess Club VR and ForeVR Darts. Meta says the SDK is more flexible than a traditional interaction framework. You can use just the pieces you need and integrate them into your existing architecture.

Tracked Keyboard SDK allows developers to pair a keyboard to the Oculus Quest 2 headset using Bluetooth, after which it will show up as a 3D model in the home environment.

We've been excited for this feature for a long time. Watch out for an update next week supporting a live-tracked @Logitech K830 in our app @vspatial!