Regardless of age or background, everyone can build a wide variety of amazing things with simple component blocks, making LEGO timely and hugely popular. Snapchat has now brought that dynamic to AR with its Rebuild the World lens.

The lens presents three ways to begin building: Solo, With Friends, and With People Nearby.

Solo allows the user to quickly begin building with virtual Lego blocks in AR in any space. With Friends option allows the user to select any Snapchat friends and invite them to build with you. The With People Nearby is specifically meant to facilitate building AR LEGOs with people in the same room or space.

The Rebuild the World lens prompts the user to scan their local environment. Once that's done, the lens creates a new Snapcode that the user's nearby friend can scan to instantly join the same tracked virtual space, and building together can begin.

There are over 3 billion smartphones globally, so it's only logical AR's focus being high on mobile. Also, there are more than a billion AR-enabled smartphones. With WebAR, the count of plausible AR users is even higher.

The top apps each apply AR in different ways and degrees. For example, Facebook and Instagram lean into AR lenses as engagement drivers.

These are good examples of AR as a Feature - AR piggybacking on popular apps rather than forcing dedicated downloads. The most popular form of AR so far is indeed AR-as-a-Feature, verifying that AR is too early and unproven to get users to go out of their way or work for it. 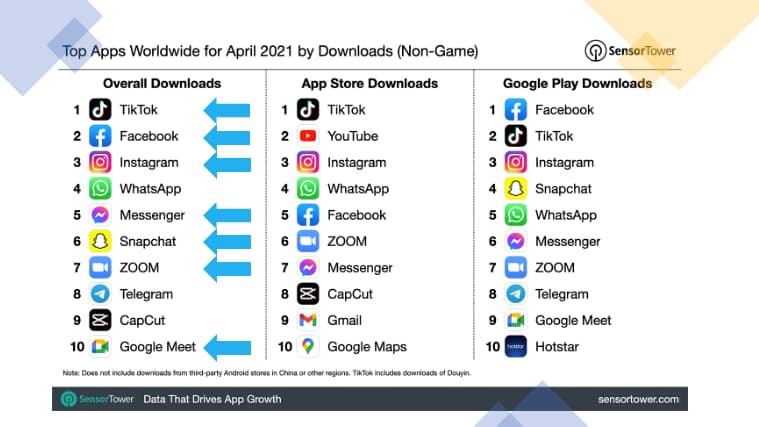 To commemorate the 50th Anniversary of the Walt Disney World Resort, Disney PhotoPass and Snap are working to virtually transform the visitors' photos into Cinderella Castle.

Using the My Disney Experience app, the users can place their favorite image captured by Disney PhotoPass photographers on the iconic castle with augmented reality.

The users see a mosaic castle of special moments shared by them and other guests in the app.