Engine was made specially to LIFT Helsinki in August 2018. The artwork was placed in an old elevator at Cable Factory during the event. The artwork Engine presented a 3D animated video with a soundscape made by Eino Rauhala.

Engine was made with Unity3D and Arilyn app to open its augmented reality part.

Flamigos refers to the flamboyance of flamingos that used to live in Korkeasaari Zoo, Helsinki Finland. In 2010, a fox got into the zoo and mauled two flamingos. The rest of the birds died of shock.

The installation took over concrete columns below the Kulosaari bridge and the wasteland along the street Capellan puistotie in Helsinki. Flamigos was made of a flamboyance of moving flamingos with the help of steel elements and programmed lights, and an AR element. The AR application displays animated flamingos on the wasteland under the bridge, via the Arilyn app.

The city of Helsinki commissioned Flamigos as a part of the constructions in the Kalasatama area. 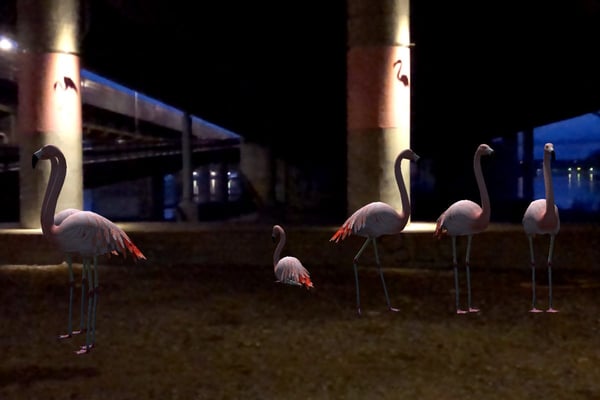 Machina de Facto presents modern forms of artificial intelligence. The central element of Machina de Facto is the Ten Second News. The Ten Second News creates a new headline and image every ten seconds with a neural network's help. The network has utilized over 100 000 real news headlines, which have been scraped from 173 different RSS feeds during the last two months.

The installation presents how machines can create entirely new realities - the artwork positions itself between truth and untruth. Artificial intelligence is present in all the installation elements and is processing and altering facts that appear seemingly familiar.

Machina de Facto was exhibited in Oodi Public Library in Helsinki in December of 2019.

The multidisciplinary artist employs both up to date techniques of media art as well as recycled materials and nostalgic paraphernalia. The humorous approach to sober topics is often characteristic of his works as well as a play with scales of things.

When traditional tools and channels for contemporary art aren't enough, AR is the way to go!