Find me on:
LinkedIn
People everywhere are becoming more and more aware of environmental questions, but many have trouble finding ways to make an impact. Brands and businesses have a fantastic opportunity to set an example and build trust and engagement while at it.
Gamified augmented reality campaign helps save the Baltic Sea in a nation-first commercial browser-based augmented reality campaign in K-Citymarket hypermarkets all across Finland.

During three weeks in fall 2019, Finnish hypermarket chain K-Citymarket launched an augmented fishing competition in stores nationwide. The campaign was done in WebAR, browser-based augmented reality, making it the first commercial WebAR campaign of its kind in Finland.

To win, participants scanned a QR code that ignited the phone’s web browser, where a floor mat was scanned, and out popped an animated sea. Each participant got to throw their fishnet into the sea, where it could be drawn out after 12 hours. If the net produced fish, a prize could be claimed at the register or 1€ could be donated by K-Citymarket to the John Nurminen foundation for the protection of the Baltic Sea. 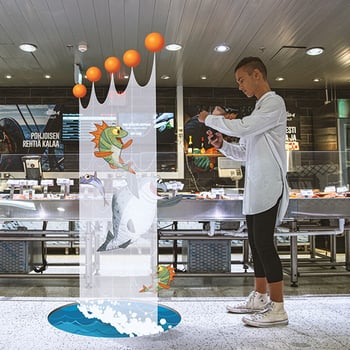 Making an impact with games and WebAR

With an interactive campaign like this, the audience is more likely to take action. In the sea of advertising, make sure your fish will survive!

By gamifying something as simple as a trip to the supermarket, K-Citymarket succeeded in drawing customers back as well as raising awareness for an important cause.

Using WebAR in a campaign lowers the bar for the audience to take part. Giving the audience the experience of AR on their phone's browser makes AR more available than ever before!

Hasan & partners first initiated the concept, the fish characters developed by Brink Helsinki and the AR and AR web-browser ignition by Arilyn.