Augmented reality is on its way to make us superheroes - by enhancing our senses. Facebook and Apple are up to bettering our hearing and seeing.

Not only is AR amazing in aiding with visual and audio challenges, but it is also great in entertainment. Disney is possibly making moves towards AR experiences! Read on for this week's AR updates!

We already covered this one on our AR Weekly Facebook Connect edition -post, but here it is again!

Facebook's Reality Labs explores how they can use beamforming technology, deep learning, noise cancellation, and AR to aid people with hearing difficulties.

The team is using AR glasses to know which sounds you want to focus on. The technology will then amplify that sound while drowning out the rest.

It's a pretty neat piece of tech that could significantly help those with hearing problems. And, once the COVID-19 is finally gone, it could help you have a conversation at a bar without having a sore throat the next day.

Apple has included a new accessibility feature in its latest release of the iOS 14.2 beta called People Detection. The software uses augmented reality and machine learning to detect where humans and objects are in space.

The goal for People Detection is to help the visually impaired understand their surroundings. For example, how many people are in a store's checkout line, how far the user is standing from the platform's end at a train station, or where is an empty seat in a crowded café? And, of course, the social distancing: the feature tells if the user is within six feet of another person to maintain courtesy and safety.

People Detection sends notifications both audibly and through haptic feedback. However, the software doesn't work in the dark.

The People Detection application is a technology that is useful even after we get our hands on AR glasses. So it's not just a cool feature for mobile phones. 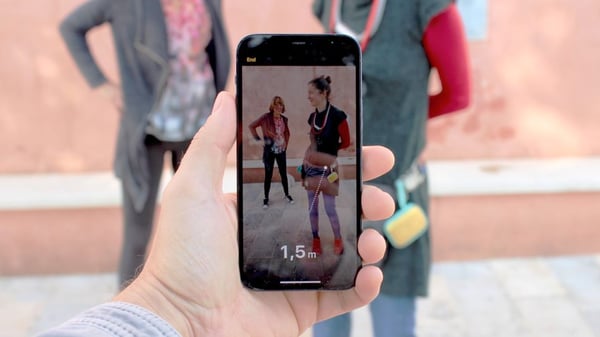 The Walt Disney Company has filed four new patents that could indicate some cool future AR experiences in Disney-parks.

The patents include light projection through micro-mirrors, an immersive experience system, a system for synchronizing media content playout, and a real-time hub for simulation and control testing.

Could there be ghostly effects at the Haunted Mansion or AR-features in the Star Wars Hotel set to open next year? We can only wait and see.

In the meantime, here's a sneak peek of Disney's Galactic Starcruiser.

This is all for this week's insights. See you next time!