When the candy brand Panda decided to use AR to launch their chocolate eggs, the augmented surprise chocolate egg ended up taking Easter by storm with almost half a million scans in just a few weeks.

We developed an AR experience featuring an animated panda for candy brand Panda and the leading supplier of branded consumer goods Orkla.

Panda had decided to join the Easter egg game and wanted a way for their launch and product to stand out in the deep sea of Easter egg providers. Panda needed something new and innovative to appeal to all kids and strengthen their brand image; augmented reality became the natural choice to make this happen.

The Panda Easter eggs featured a sticker and a small picture of Panda inside the surprise box. By scanning the image with the Arilyn app, out of the picture leapt a virtual panda.

The panda then jumped off into the air to fly around the room. The Panda performed different activities with every individual scan, like watering flowers, painting Easter eggs, or jumping and dancing around. 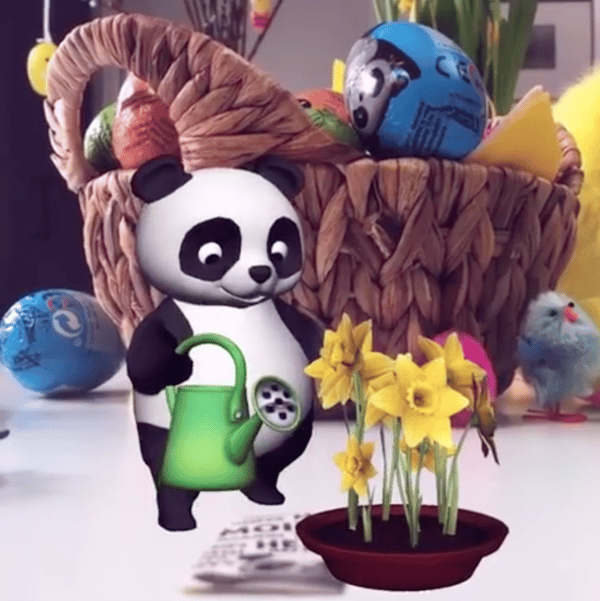 The campaign was widely popular, amassing close to half a million individual scans in the few weeks surrounding Easter. In a country with a population of just 5.5M, this is a significant number to achieve.

Users returned an average of 20 times to watch the panda jot around in front of them, and people started to call it the “Panda-Kinder”, referring to the most famous of surprise chocolate eggs. According to our feedback, the surprise was appealing to the kids and people of all ages!

We developed the concept at AR workshops held with Panda’s team. After the panda team decided upon the content and appearance, the final production and Arilyn’s in-house production team carried out the AR development.

Using augmented reality as the surprise instead of the usual plastic toys also meant that Panda kept the amount of plastic waste at a minimum. A proof that AR can be the spearhead in moving the consumer culture away from disposable plastic to meaningful virtual experiences without burdening the planet.

The Panda Easter egg -case shows that you don’t always have to go big. Even a little experience can gain success when thoughtfully planned out with a clear goal and target group in mind — of course, spiced up with content to suit the brand and product in hand.

Read our article on how to create compelling content here »